So, you’ve decided to visit Fraser Island? Awesome choice! Fraser Island is as close to paradise as you could find! However, before you set off on your journey here are our top 14 Fraser Island tips to make sure you have the best time there possible! 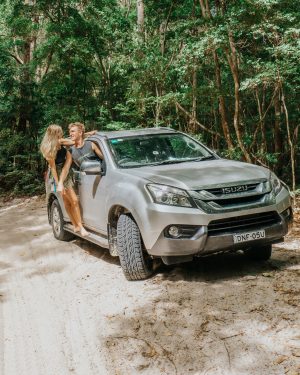 How are you going to get around?

A 4WD isn’t a recommendation, it’s a necessity, otherwise your car will join the ever-growing graveyard of twisted axels and cars claimed by the ocean. Honestly, the driving was much easier than we imagined, and we didn’t get stuck once. But don’t let this lull you into a false sense of security. We did see quite a few people stuck on the inland tracks, but with the right technique and equipment you should be totally fine. And if-not many 4WD enthusiasts love it so much that helping stuck idiots is second-nature to them and they are more than happy to lend a hand.

If you don’t have a 4WD, there are many rental operators in the area who can kit you out with a car and the appropriate gear. They will also give you a run-down on how best to drive around Fraser and lots of good information.

If driving yourself around doesn’t suit, there are many tour operators that explore the island. Essentially you have two options, a seat onboard a 4×4 or onboard a super heavy-duty large bus. We would highly recommend the smaller more personal tours in the 4×4’s. Many attractions are usually quite busy, and a busload of people arriving at the same time doesn’t help! Additionally, you’re getting a taste of the authentic 4wding Fraser Island experience!

How do we make sure we don’t get bogged (stuck)?

This is probably high on most people’s lists, unless you want to experience a bit of sweat, swears and tears. Many people actually get bogged before even making it to Fraser Island, with the drive onto the barge at Inskip Point being quite soft sand.

In order to not make an idiot of yourself just before driving onto the sand at the Inskip Point carpark, lower down the pressure in your tyres. Doing so makes your tyres ‘footprint’ up to twice as large, helping greatly when driving on/through sand.

We let ours down to 20 PSI however everybody has a different suggestion in the 16-24 PSI range, but 20 worked for us. We did however let ours down to 18 on some of the seriously soft inland tracks.

Obviously, you will need a tyre gauge to check your pressure, these are $10 from most service stations so make sure you grab one!

Not all of the following are necessary, but they will make your life easier if you get into trouble.

Drive to the conditions

Make sure before getting on the sand to engage your 4WD, this means moving from 2H to 4H. Stay in 4H for as long as you are off-roading. If you are running into trouble in softer sand, 4L is a lower gear and will usually be able to pull you through. However, make sure you don’t leave it in 4L, otherwise you will burn through much more fuel.

Stock up on supplies and fill up on petrol

This is a must. Well not really, but it does save you a LOT of money. There is a small supermarket in Rainbow Beach you can purchase food supplies at prior to taking the barge. However, there would be a greater range/cheaper prices if buying prior from a major town e.g. Gympie or Hervey Bay.

If you run out of goods, there are shops and cafes at various locations on the island with a limited range of product offerings including food, alcohol and souvenirs. You will find these at Eurong, Happy Valley, Cathedrals and Orchid Beach. Be warned however that hefty price tags are attached for the convenience. Although we lashed out and bought a coffee each day, which of course is justifiable at any cost!

It’s also a good idea to ensure you fill up your petrol tank completely before taking the barge to Fraser Island. There are petrol stations on the island however their prices are shocking. We just made it to the barge off Fraser Island with literally zero fuel after a solid two days exploring.

To drive a vehicle on Fraser Island it is requirement to purchase a Vehicle Access Permit from Queensland Parks and Wildlife Service. This costs $51.60 for a one month of less pass. You can purchase the pass online at or in person at various over the counter locations. For more information please visit the Queensland Parks page.

If you plan on camping, you will also need to purchase a camping permit. These run at roughly $6.35 per person per night, or $25.40 per family per night, whilst children under 5 are free. These often book up quickly in peak period so try book in advance where possible.

Stay the night before near the barge departure point

In our view this was essential so as to maximise our time on Fraser Island and to work with the tides. We stayed in Rainbow Beach the night prior and woke up at the crack of dawn to get the first barge over to Fraser. Rainbow Beach is just ten minutes from the barge departure point so is the ideal spot to crash the night. There are various accomodation/food options in Rainbow Beach.

Knowing the tide times is absolutely vital. Print them out or grab a copy from a Queensland Parks office. Given you have to drive on the beach a lot, it’s important to know when some spots un-drivable. A general rule of thumb is to avoid driving two hours either side of high tide and its best to stick to when it is going back out. When you get off the barge on Fraser, driving around Hook Point requires a fairly low tide and its recommended only to try two hours either side of a low. There is however an inland track that goes back to the beach around the point if necessary. Crossing Eli Creek is another time when its preferable to cross when its lower water, it’s generally not too bad, however it can get deep if you leave it too long into a high. Driving too late into a rising tide could leave your car getting caught out and being claimed by the waves.

We can’t stress this enough, BRING INSECT REPELLANT! We’re not sure if it was the time of year or what, but there were a lot of insects of the biting variety! During the day Horse/March Flies patrolled the beaches and twenty would be sitting on your vehicle the moment you stopped. They don’t call these flies horses for nothing, they are big and have a bite like a horse! At nighttime there were plenty of mosquitos battling for your blood as well. Don’t let this put you off though because of the repellant none of us ever got bitten.

There are a few animals to watch out for

No, not in a cute and cuddly way. Well.. I guess some are, but there definitely not friendly! Firstly don’t swim in the ocean. Simple as that. We talked to a lot of people who often see sharks swimming just off the beach in knee deep water, not an ideal swimming choice. Stick to swimming in the lakes if you prefer all of your limbs. Also just to add to the oceans ferocity, there are a lot of Blue Bottle Jellyfish which have a sting making you wish you were dead. Even the occasional crocodile has been seen catching some waves!

The main animal you might come into contact with on the island is the dingo. Dingos are an Australian wild dog. They usually roam around in packs and have been known to attack humans, in some instances fatally. Generally they will steer clear of humans unless you have food open so keep a lid on everything and don’t try feed them. Its best not to walk around alone and carry a stick to try ward them off. This is their island and if you see them they are just hungry and simply scavenging for food. Steer clear of them and they’ll likely avoid you. We only saw two dingos on our trip from our car, but they are scattered all through the island.

If travelling with kids of any age, don’t just camp anywhere. Make sure you choose one of the campsites that is dingo fenced to prevent attacks. There are a handful on the island; these being Cathedrals, Central Station, Cornwalls, Dundubara, Lake Boomanjin, Waddy Point Top. These sites also offer basic facilities such as toilets, tap water, BBQ’s, bins and some even have showers. There are many many more camping zones across the island however they are not dingo fence protected.

There are hotels and established campsites

If camping and roughing it isn’t your thing, don’t panic. There are a few hotels and properties that are available to rent on the island. We chose an in-between option and stayed at the Cathedrals privately owned campsite. Here they have pre-setup tents with their own decks, the tents even have mattresses inside so you’d definitely call this glamping! In regard to hotels the Kingfisher Resort is the 5* premium option with rooms nestled amongst the rainforest. There are however a couple of cheaper more budget friendly hotels on the island such as the Eurong Beach Resort.

There are speed limits and police

Although being on Fraser may feel like a different planet, the road rules apply just as much as anywhere else in Australia. There is a police station and there are police. Put it this way, it’s a small island and they don’t have much to do except for uphold road rules. They commonly patrol the main beach road and inland tracks performing random breath tests, as well as checking for speeding drivers and those not wearing seatbelts.

The rules are there for a reason, and accidents are common on Fraser even when people are obeying them. Throwing drink driving or speeding in the mix and the chance of accident is exponentially higher. Sand roll-overs are common, especially with the changing dynamics of the beach everyday. Additionally with the main beach being a road, many fisherman stand on the shore and need to be watched out for.

The speed limits are as follows;

Remember to keep an eye out for any signs throughout the island.

There is barely any mobile reception on the island, maybe if your lucky you’ll get one bar at some point. But don’t rely on being able to get your daily dose of insta or message friends. Take it as a forced digital detox, its great! Although you will need to make sure you print off or screenshot any information before heading off!

Eli Creek is basically natures own lazy river. You’ll always find people floating down the stretch of creek to cool off, its seriously an epic experience. We stupidly forgot our floating device, however luckily the general store at the Cathedrals had a few options. If however you have a fantasy of floating down on a gigantic golden swan or similar, you’ll need to take it with you before you go!

What better way of truly seeing Fraser Island, than by air!  Air Fraser Island operate 15 minute scenic flights directly from 75 Mile Beach where there is a runway along the groomed sand. These flights give you the thrill of a beach landing and take-off which is a pretty unique experience anywhere in the world! Flights are surprisingly affordable for such an experience and run at $80 per person.

If you haven’t already we highly recommend you check out our Ultimate Fraser Island Guide.