So you’ve got a lengthy Kuala Lumpur layover? This is our ultimate way to spend it so that you can maximise your sightseeing without burning yourself out. Most of the major tourist locations are super close to Kuala Lumpur CBD and easily accessible. This means that even with a short layover you should be able to see quite a lot!

We suggest getting Taxi’s or Grab cars to get around as they are relatively cheap, especially when travelling in groups. The public transit system although good has irregular schedules and is often not direct. The following could be if you had a full day and weren’t spending excessive time in each spot, ending by nightfall at the glistening Petronas Towers. This is the most time effective route however feel free to start it wherever you like and we suggest walking from (C)-(F). 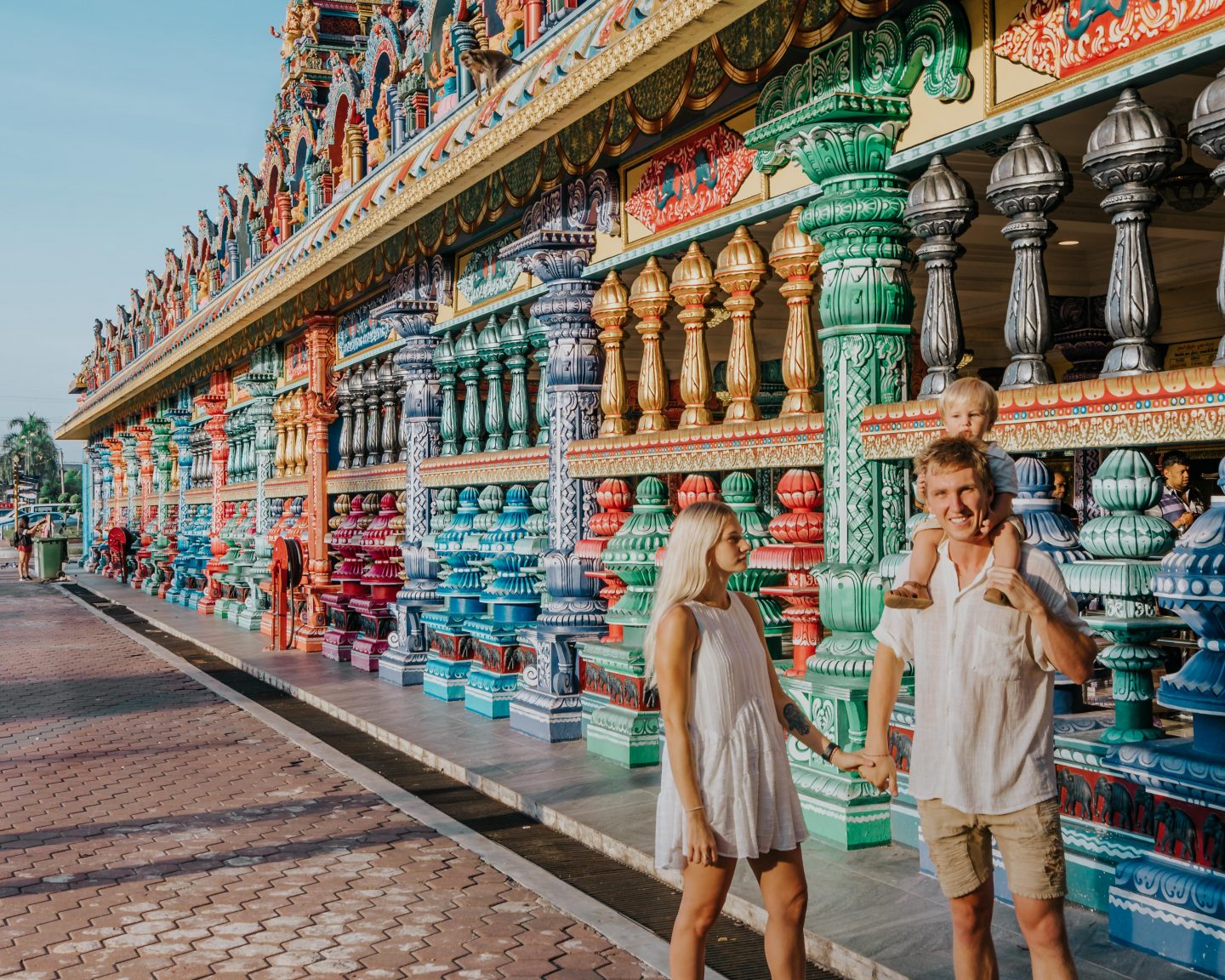 The Thean Hou Temple is a vibrant and colourful Chinese temple consisting of various cool spots to check out. It is situated on over 1.5 acres of prime land atop a hill in Robson heights offering great views, just out of the CBD. The temple is free for anybody to enter and there is no dress code except to dress respectfully. The star attraction is the 6 tiered red and orange pagoda that is impossible to miss.

The temple is home to three different goddesses, Tian Hou (goddess of heaven), Guan Yin (goddess of mercy) and Shui Wei Sheng Niang (goddess of the waterfront). To get better vantage points you can climb to a second level looking down over the main square. You are allowed to enter the prayer hall (just take off your shoes) and you can also have your fortune read to you by using the prayer sticks (we suggest asking a staff member for help, its super cool to do!).

Outside the temple is a garden filled with large statues of the 12 Chinese zodiac animals. We spent ages walking around comparing family members to their year and what animal represented them. Paige was the lucky Pig, James the monkey and Ollie the dog! 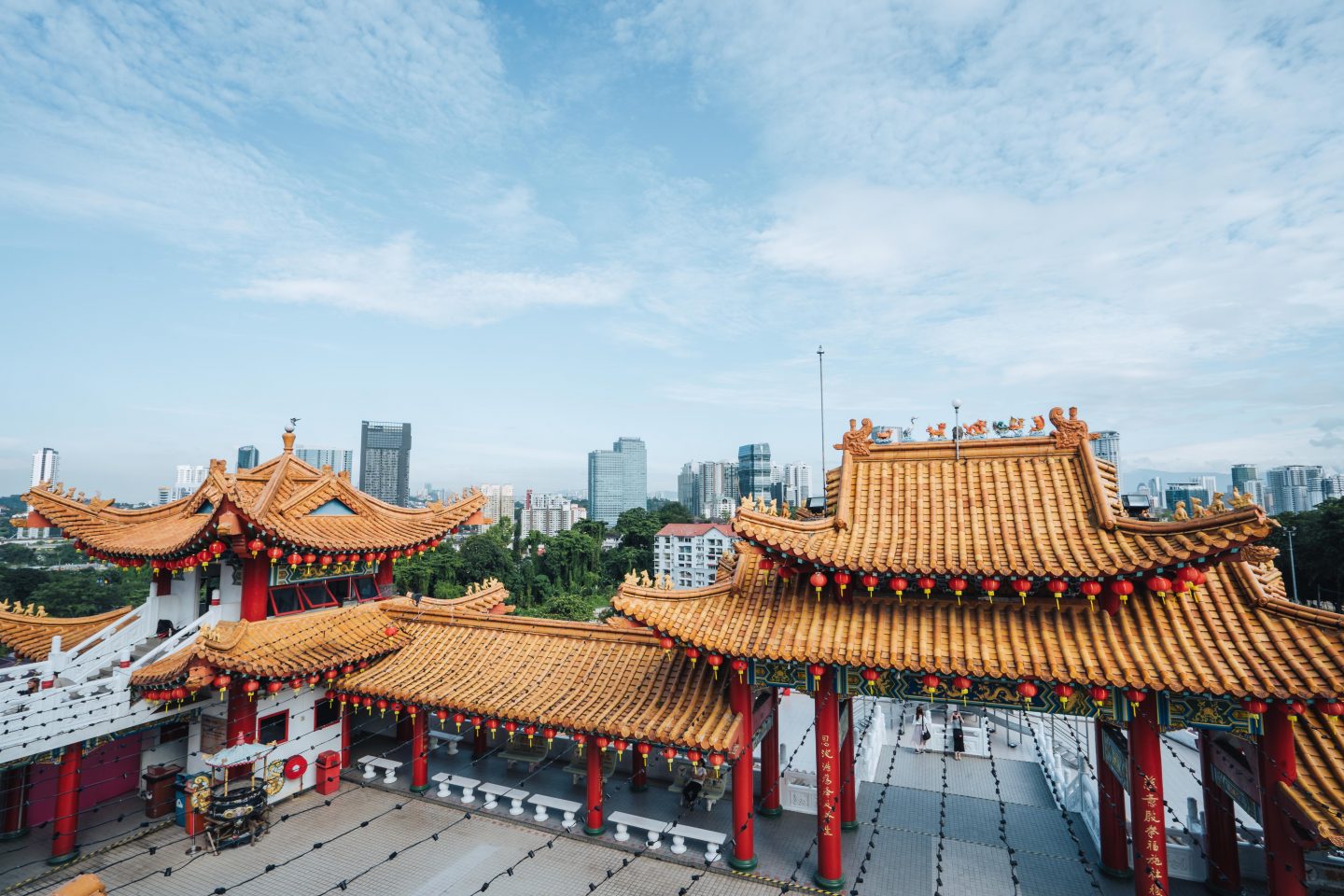 Brickfields is actually the name of an area of Kuala Lumpur also known as Little India. It is right on the cusp of the CBD and is a great spot to immerse yourself in the Indian heritage and culture that plays such a bit part of the cultural makeup of Malaysia. Brickfields is actually home to one of the nations oldest Indian settlements. The brick-paved area is adorned with white street lights whilst yellow and purple dominate the colour scheme. You will find loads of Indian clothing, spice and jewellery stores as well as lots of amazing traditional Indian restaurants! Why not grab some food to sustain you, you’ve got a big day ahead! 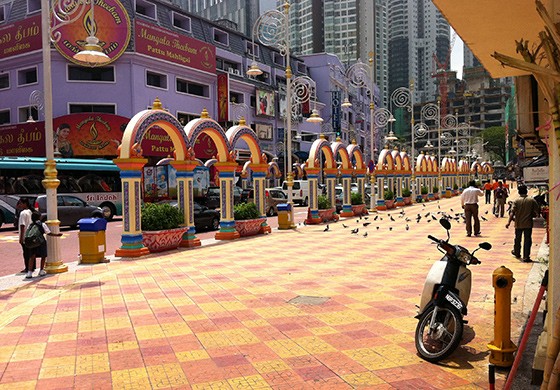 Now that you’ve filled your belly, go get your walk on around the massive 90-hectare green patch of the CBD, Perdana Gardens. This huge area is home to many different attractions all showcasing different types of plants and is splattered with exhibits. There’s even a 2-hectare deer park that is free to enter. We loved escaping the bustle of the city amongst all the lush green and large lakes. Even if you just check out some of the gardens, it will make you feel great and you might even find a few good photo opportunities! Right next door to the gardens is also the Butterfly Park, of which Paige and Ollie loved! 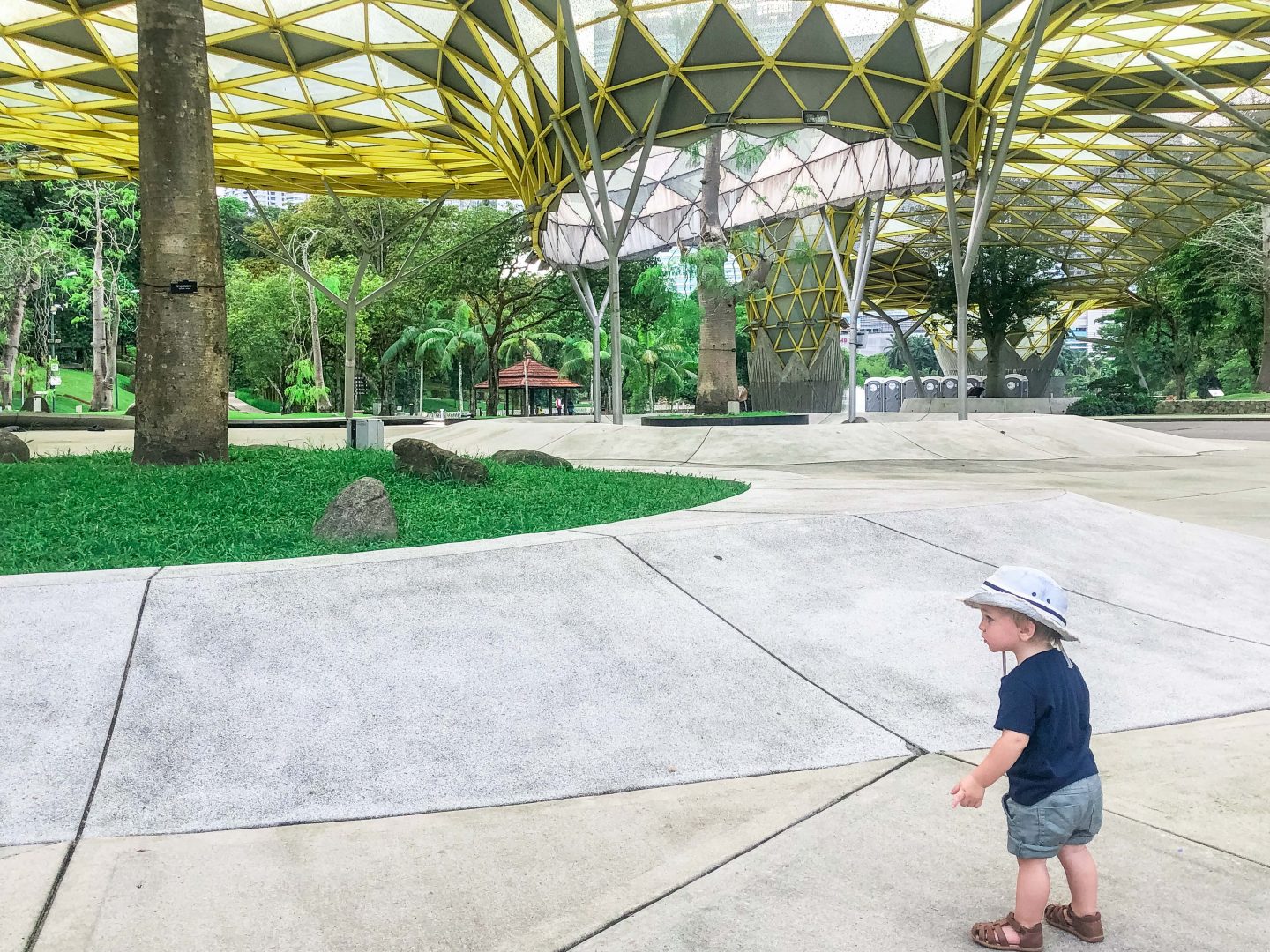 Just 15 minutes walk from the top of the gardens and you will find yourself at Merdeka Square. An expansive palm tree lined grass covered park sitting at the footsteps of the grand Sultan Abdul Samad Building. This impressive brick building takes influence from gothic, western, Moorish and Arabic styles. Massive curved copper-topped cupolas, sweeping arches and a tall clock tower all make this building contrast amazingly with the skyscrapers surrounding it. 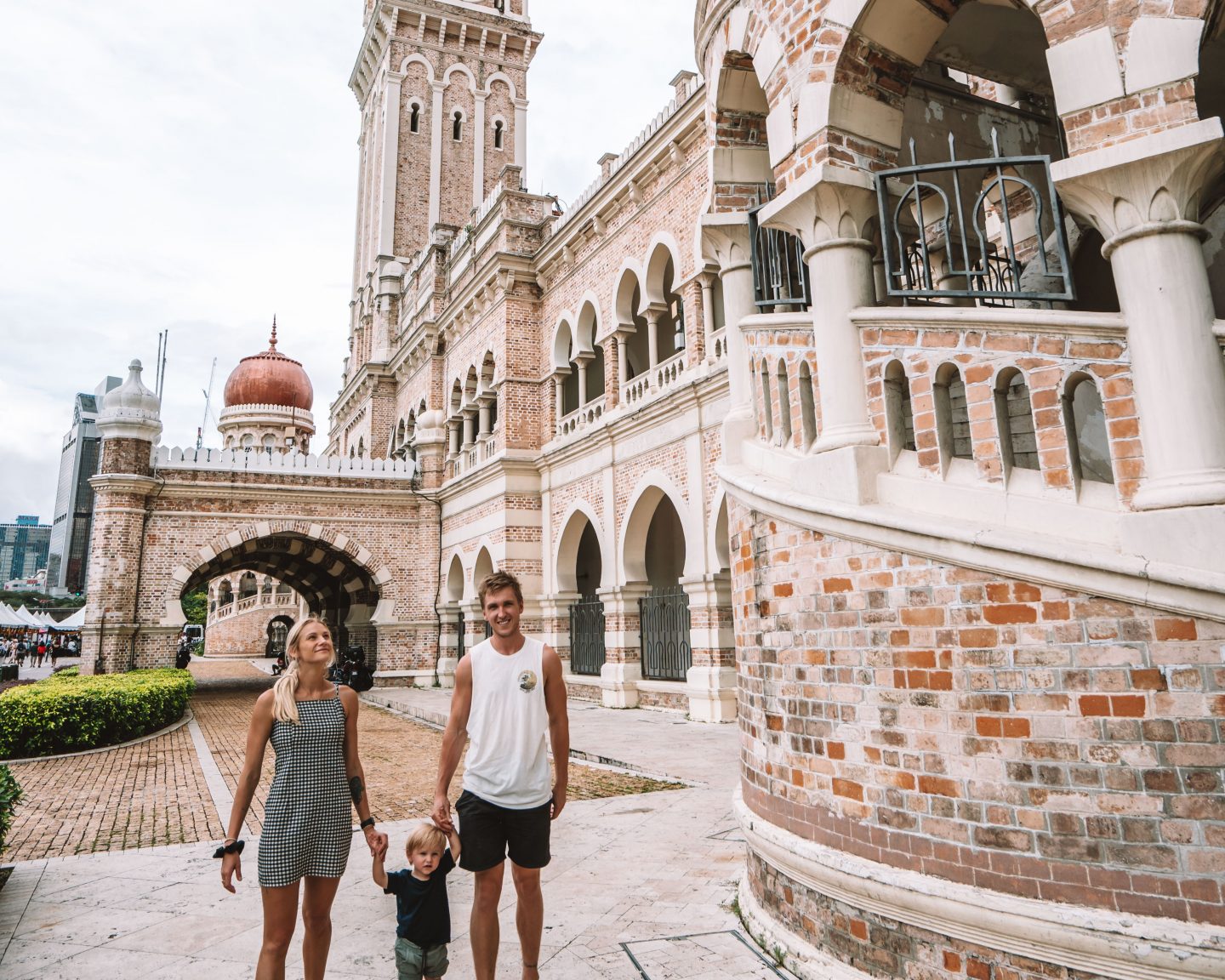 From the same architect as the Sultan Abdul Samad Building, AC Norman, this mosque is equally as impressive.  This historically significant mosque stands on the spot where Kuala Lumpur was founded, at the confluence of the Klang and Gombak Rivers. Not only is this where Kuala Lumpur was founded but where its name comes from. Kuala Lumpur translated literally means the muddy confluence of two rivers, meaning here. Set against the rivers the amazing architecture looks stunning and is well worth viewing from the nearby bridge. 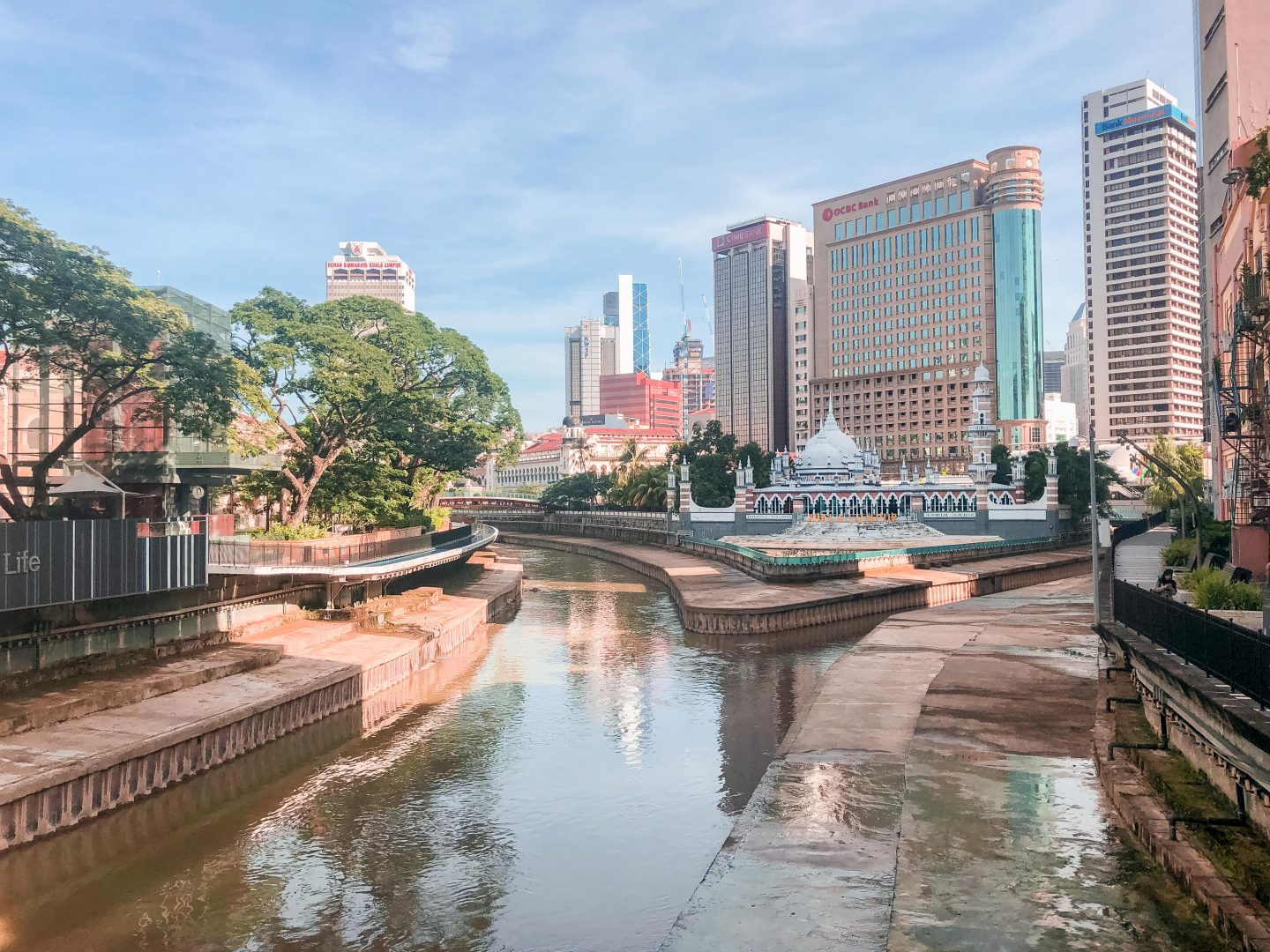 Petaling Street is known for its night market however, market stalls start filling up this famous street from mid-morning. You will find everything from counterfeit goods to souvenirs to fruit and veg. Night-time can get crazy busy so the afternoon is a good time to visit. It’s also ideal because you can snap up some yummy lunch from the huge array of street food. We happened to find an amazing steamed bun stall that had about 30 different types of steamed buns! YUM! The area has a really traditional vibe filled with Chinese lanterns and lettering. 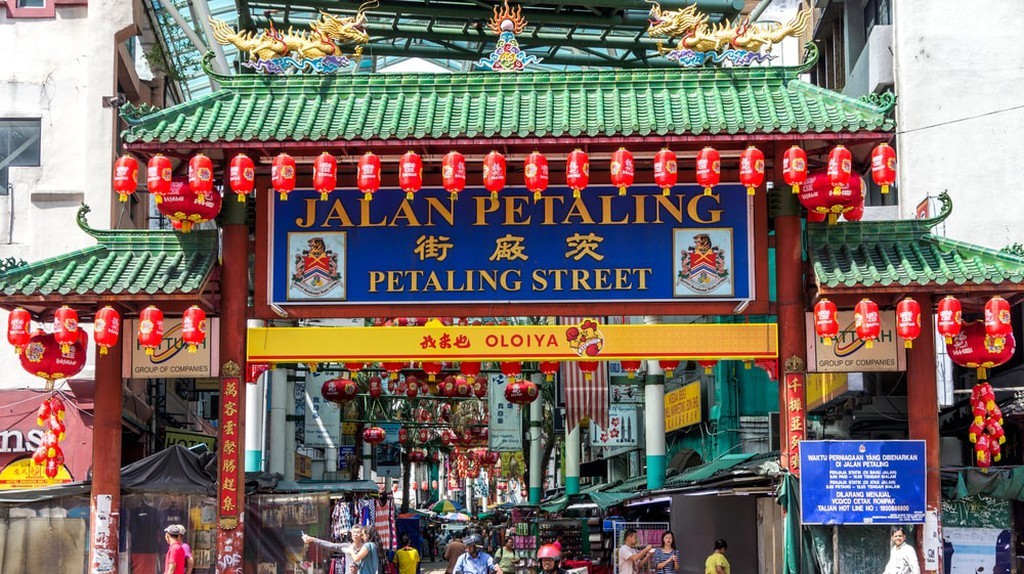 The Wilayah mosque is also known as the Federal Territory Mosque and is relatively new, opening its doors in the year 2000. The mosque is a grand structure taking influence from Turkey, India, Iran, Morocco and Malaysia. It is truly an impressive site all of the intricate work and detail that has gone into the massive house of worship. In fact the main prayer room is capable of holding 17,000 people! Being a mosque you are required to dress modestly and they provide free robe hire if need be. Get your cab to drop you off at entrance B if you require a robe. Upon arrival, you will be taken of a free tour of the mosque to learn about it. They encouraged us to take photos in all parts of the mosque which was great as there is so much brilliant geometry and colour begging to be captured. 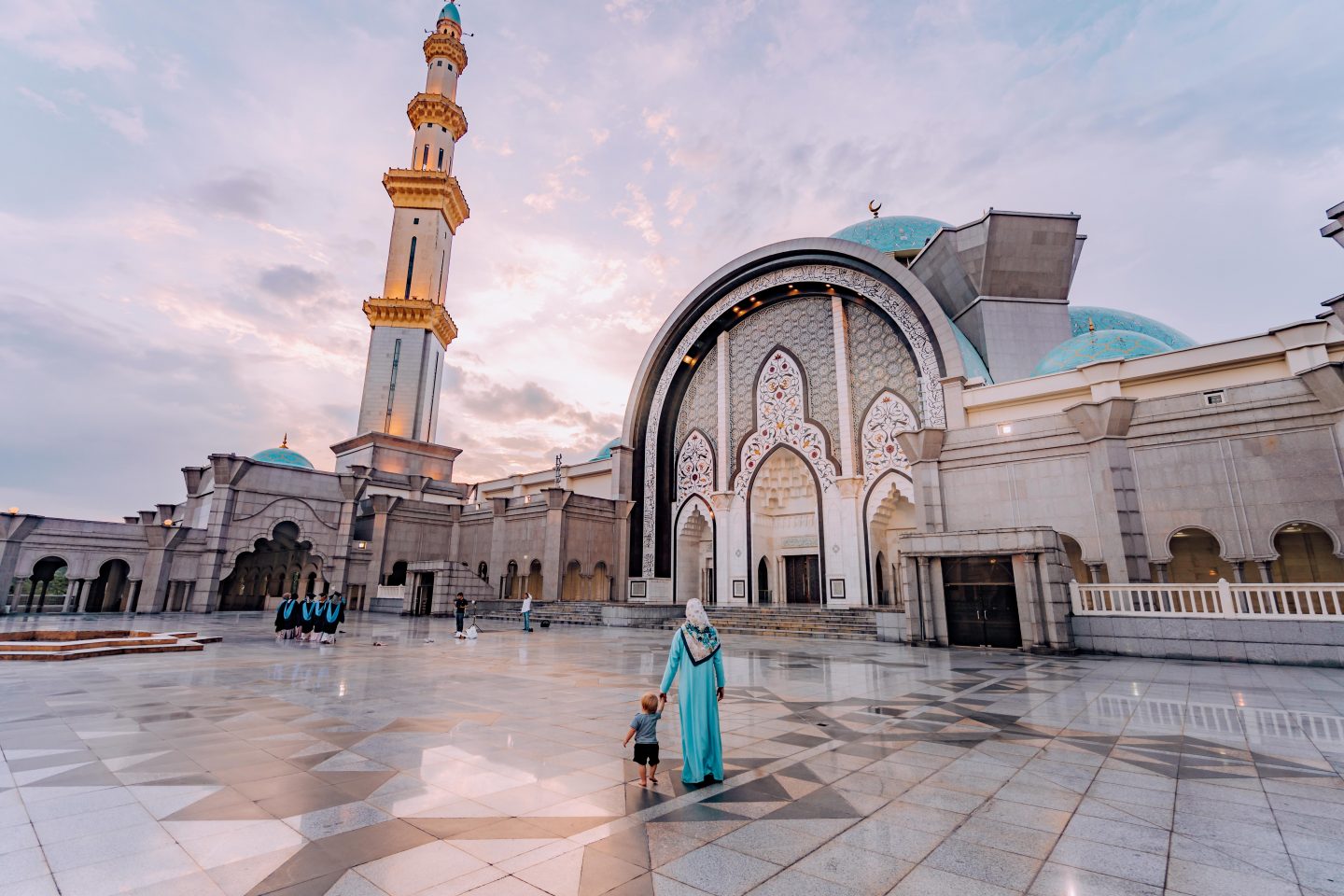 Surely you have seen the rainbow steps plastered all over Instagram? They are actually the stairs up to the most sacred Hindu temple in Malaysia! Located 15km north of the city, this is the furthest away from the city you will get on our route. It is filled with various shrines but also one of the world’s tallest Hindu statues, an enormous gold figure dominating the entrance. In 2018 the steps up to the caves were painted vibrant rainbow colours. This controversial decision has called for its National Heritage Status to be delisted. However we and a lot of other people think the splash of colour has added all the more to the site. Especially with the colourful Hindu temples next door. 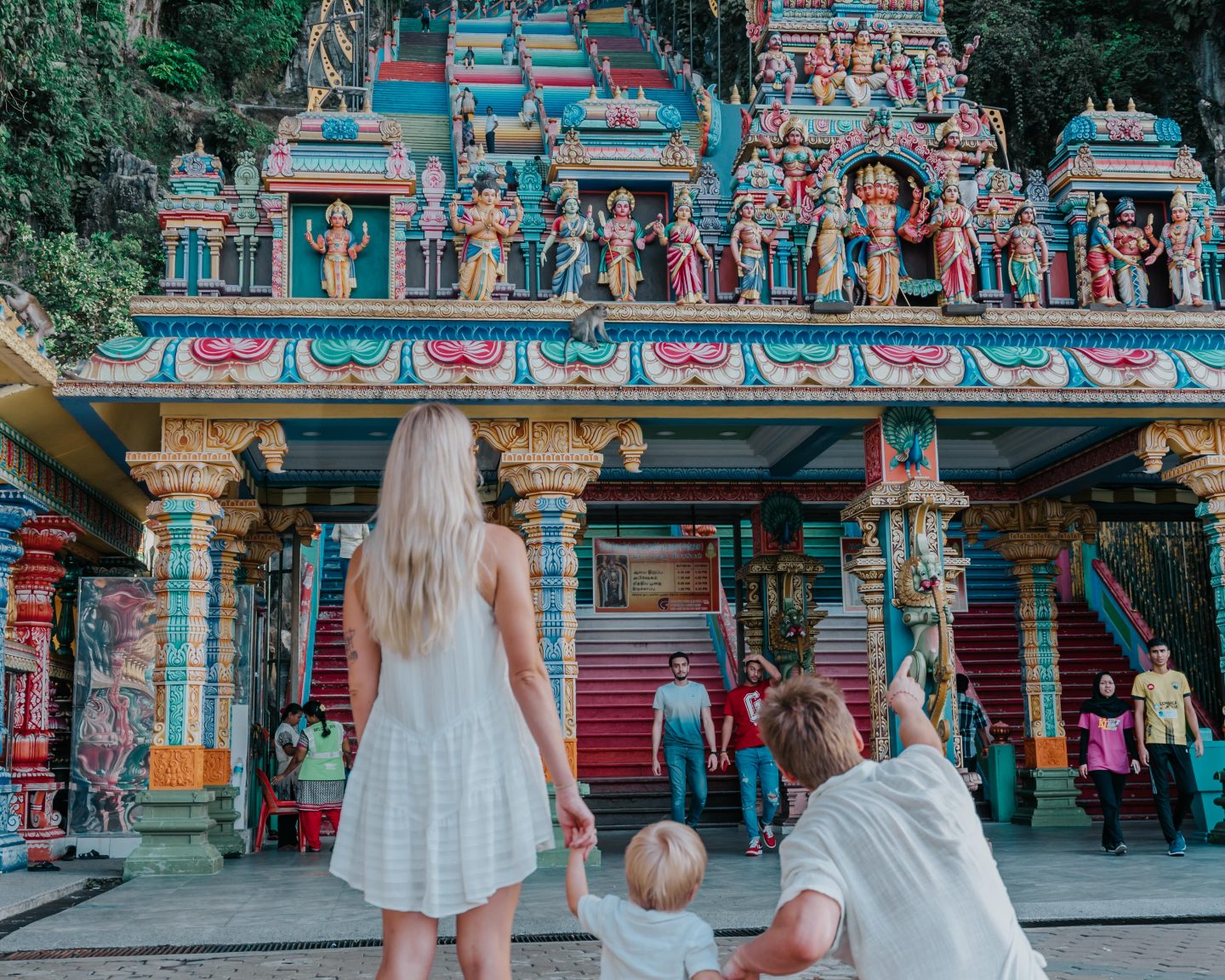 For the final stop of your mammoth day, we suggest it be the world famous Petronas Twin Towers. An impressive sight on the Kuala Lumpur city skyline. This ultra-modern sleek duo of buildings is in complete contrast to any of the other skyscrapers around it. It almost appears to glow. However, it is under the cover of darkness that the towers truly shine. Literally. They light up like an enormous glistening beacon that’s impossible to miss. KLCC Park sits right at the base of the towers and is a refreshing patch of greenery providing the perfect vantage point of the towers. 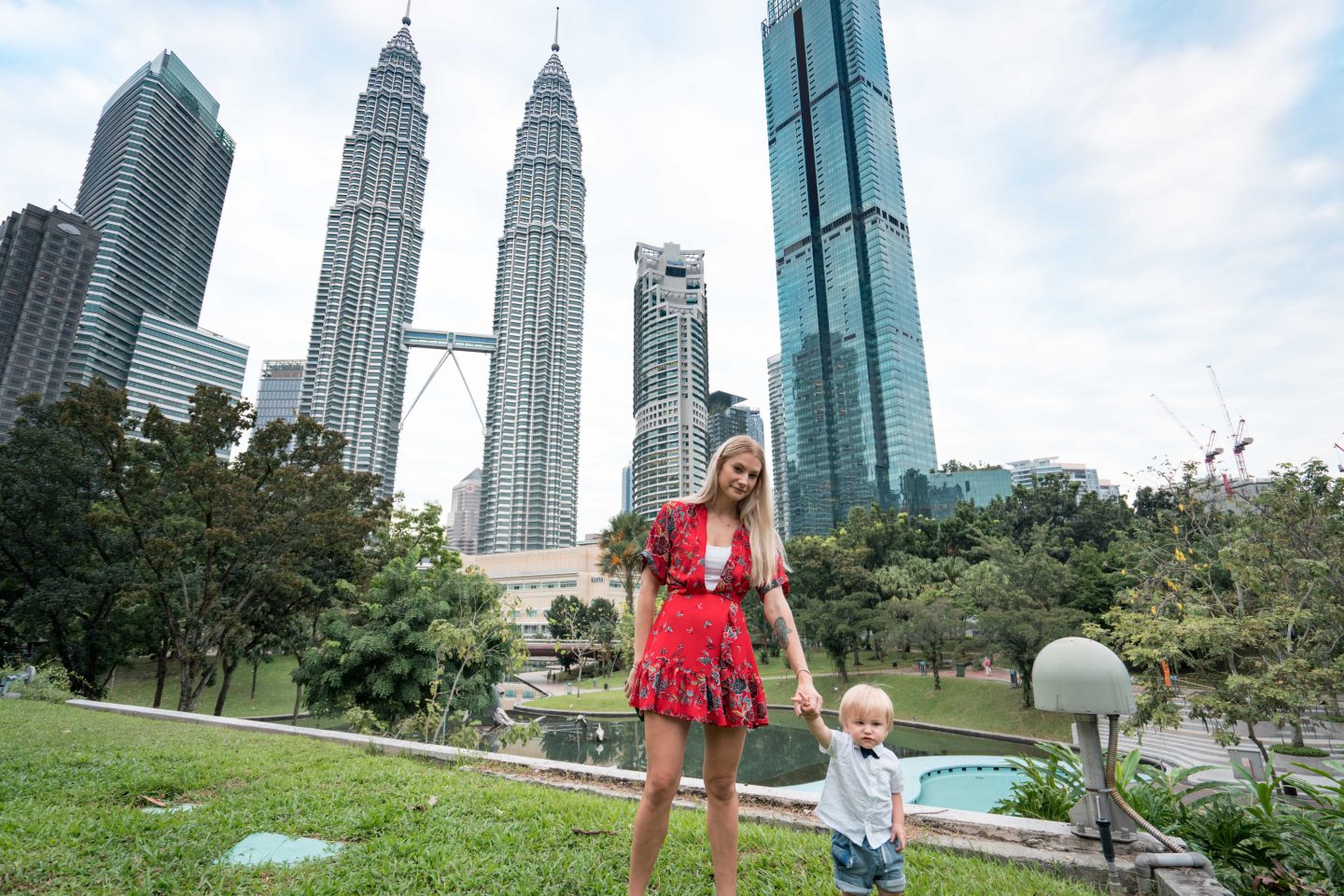 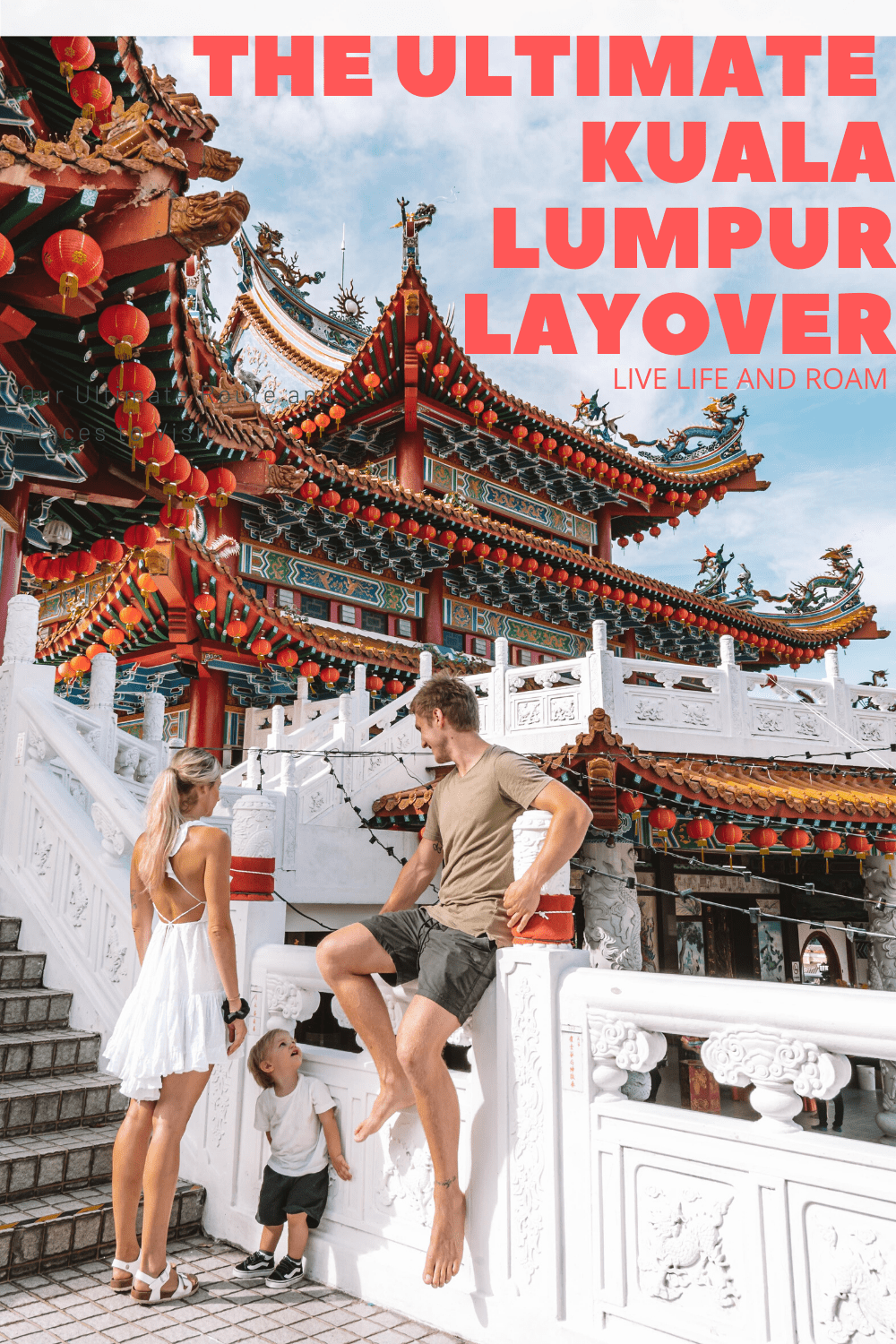