The SS Maheno Shipwreck is definitely one of the coolest things on Fraser Island. This large wreck is one of few in the world sitting on the beach itself, so no diving required! However, every year more and more sand buries the ship, so you better hurry up and book a trip to Australia to see it! 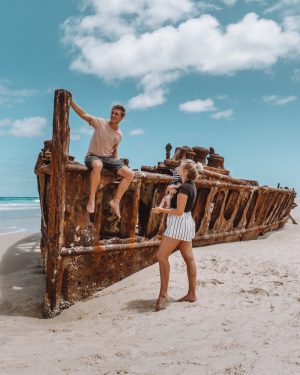 How to get to the SS Maheno Shipwreck

The Maheno wreck is super easy to get to and it is right on the main road (and by road we mean the 75-mile-long beach stretching the Eastern side of the island).

It’s an easy sandy drive about 5-10km north of Happy Valley (yes that’s a real town name!). It’s just a short drive further along from Eli Creek. You will not miss the massive rusty wreck being lapped at by the waves.

We suggest you also download offline Google Maps of Fraser Island before you go as it has all the points of interest of Fraser Island and the tracks so that you can use your GPS as normal without phone reception. If you made it onto Fraser Island with your vehicle this drive will be no worries at all.

What to know about the SS Maheno Shipwreck

What’s crazy to imagine is that this ship used to actually have three floors! But nearly 100 years of mother nature has buried most of it leaving only the very top of the ship poking out of the sand.

For those interested in the history of the ship, the Maheno was built in Scotland in 1904. However not long after it was utilised in the war effort as a hospital ship during WW1. After the war, it was used to travel between New Zealand and Australia and subsequently sold for scrap metal to a Japanese company.

On the journey to Japan, the Maheno broke the chain between the ship towing it due to a tropical cyclone, and it eventually washed up on Fraser Island with a small crew onboard! 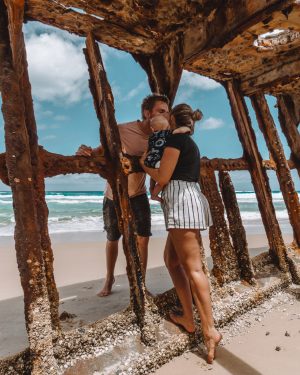 Where to stay on Fraser Island?

To save you the serious struggles of searching for the best accommodation options on Fraser Island, we have compiled a list of them for you.

This internationally renowned hotel was actually visited by Prince Harry and Megan when they came to Fraser Island. This luxurious rainforest retreat has 152 rooms with large private decks overlooking sea, bush or lakes.

If the Kingfisher is out of your price range, the Eurong Beach Resort offers similar facilities right on 75 Mile Beach. It is also relatively close to many attractions. It’s the perfect comfortable base for seeing the entire island.

For the true authentic ‘camping experience’ on Fraser Island, look no further than the Cathedrals. With options from 1-3 Bedroom cabins, 1-2 Bedroom Permanent Canvas tents, or campsites for your own gear – you’ll be sure to find something for you!

If you haven’t already we highly recommend you check out our Ultimate Fraser Island Guide.