Puffing Billy, the childhood favourite steam train of many Melbournians and visitors from all over the world has stepped it up a notch. You can now experience it onboard a fully restored dining carriage, enjoying a three-course meal as the train winds through the hills at night! It’s the perfect date night to leave the kids at home and enjoy the magic of stepping back in time. 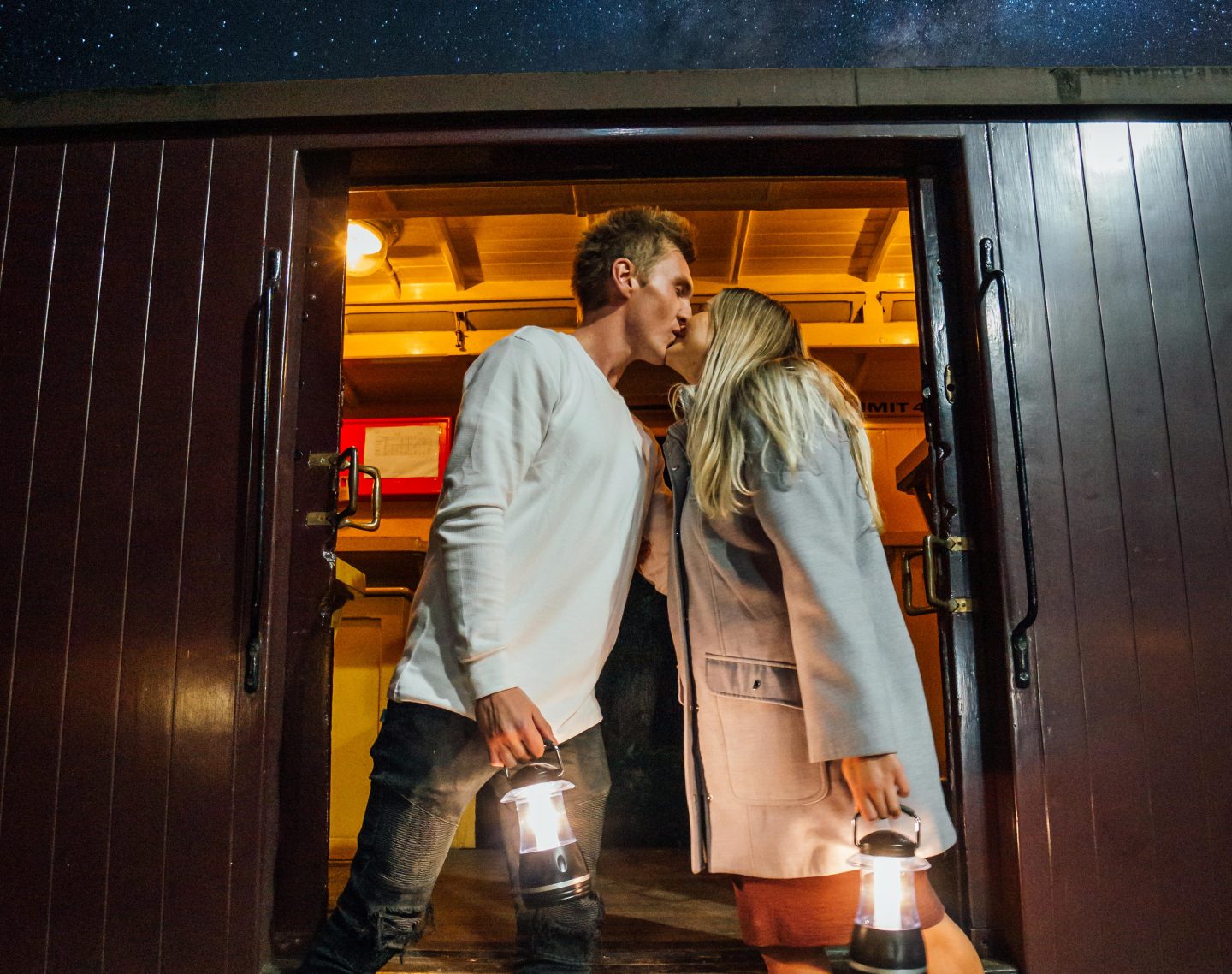 How to get to Puffing Billy

Puffing Billy is located in the picturesque Dandenong Ranges, just an hour’s drive (40km) east of Melbourne. It’s the closest spot to the city if you want to get out of the bustle of Melbourne and into the rainforest. Puffing Billy stops at 6 different stations in the region if you are keen to check it out.

If you are keen to experience it after dark however, these experiences depart from Belgrave Station. Once you arrive at the station, there are plenty of signs around pointing you towards the special Puffing Billy station, just a two-minute walk away. If driving, there is lots of free parking in the area. Otherwise if coming by public transport simply catch the Belgrave line to the final stop; Belgrave.

We parked the car and strolled to the Puffing Billy platform at Belgrave station. A light fog hung in the crisp evening air, whilst the sound of the violin echoed faintly in the distance.  After a brisk walk we arrived on the platform, the train awaiting us on the platform with steam billowing from its front. The heritage train and platform combined with the live music made it feel as if we had transported to another era. 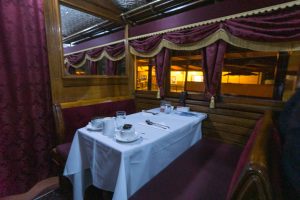 Shortly after a lovely host took us to our table aboard one of the meticulously restored First Class dining carriages. White table clothes, ruby and gold curtains, and a fully set table. It seemed like we were the lead characters on the set of a James Bond or Poirot. As we settled in our drinks orders was taken whilst the train slowly pulled out of the station, a selection of boutique beers or local Yarra Valley wines are available. 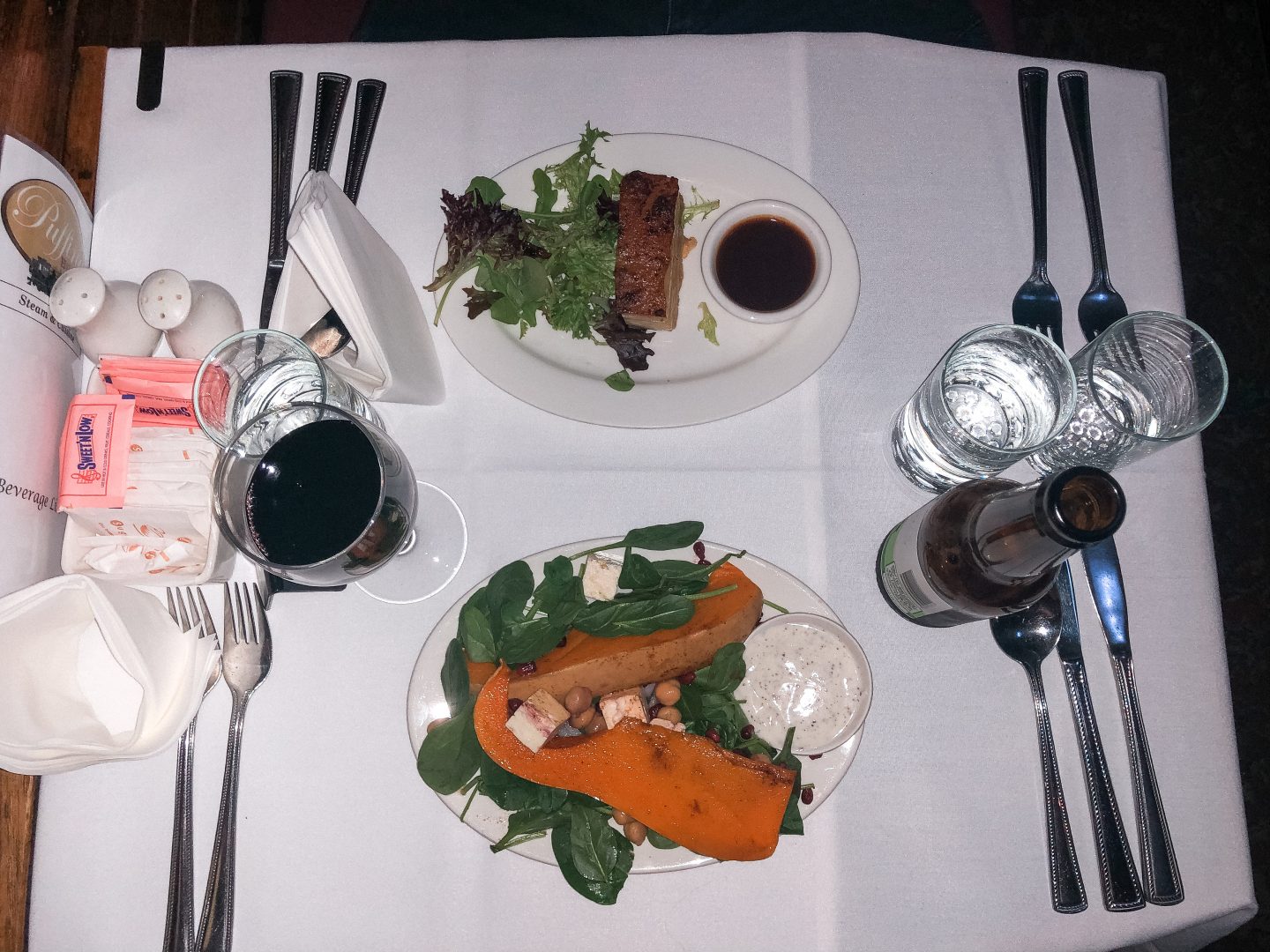 The train wound its way through the Dandenong Ranges, offering glimpses of lights of nearby houses and the distant CBD. There is a friendly atmosphere aboard the train, almost like everybody knows each other, and people chat throughout the carriage. Shortly after our entrees and mains were brought out to us. 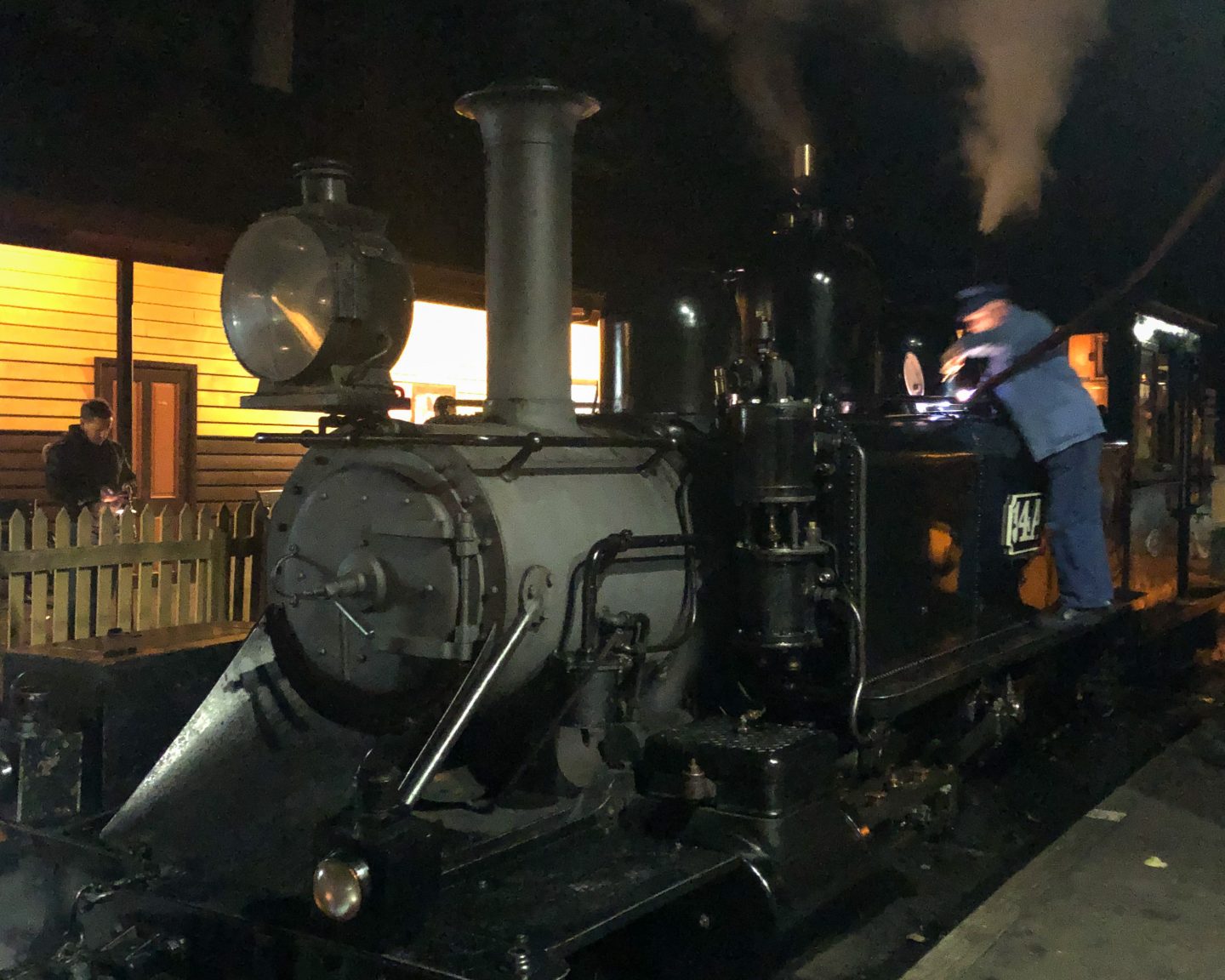 Puffing Billy offer few options for each that you preselect when booking, wanting to sample everything we both ordered different dishes. (Hot tip: Do this everywhere you dine out, we even split different burgers in half!) The menu changes every now and then so check it out here. We had a ginger braised pork belly and a smokey pumpkin, roasted chick pea and pomegranate sald for entrée. And for mains a Cajun chicken prawn jambalaya and a baked red capsicum stuffed with pumpkin and spinach risotto. Everything was super delicious! 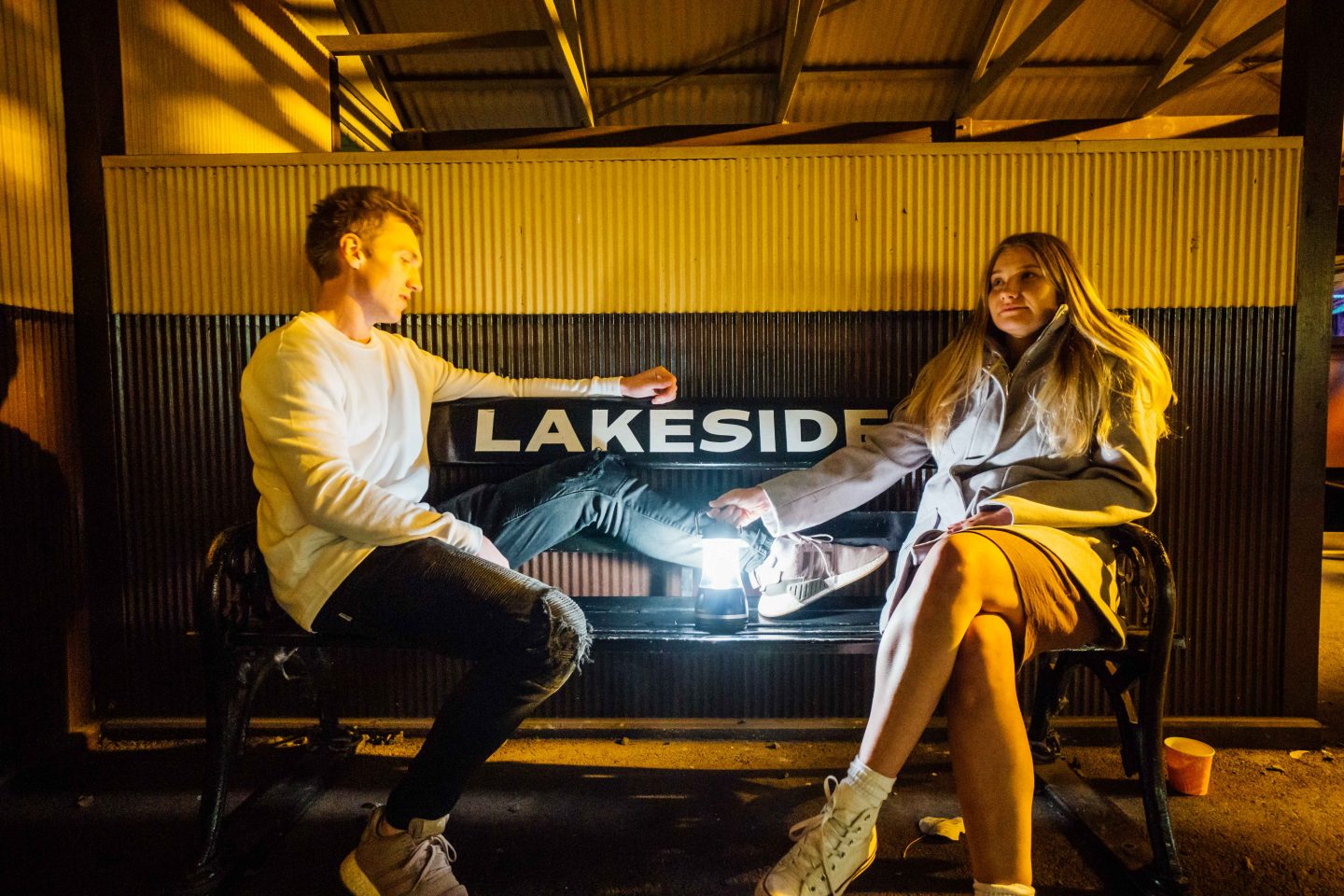 Shortly after our meals the train pulled into Lakeside station, our half-way point of the evening. We were provided lanterns to take a romantic walk down by the lake and along the station whilst the train prepared for the return. On the return voyage the violinist from the start of the night played on our carriage whilst they served deserts and warm beverages. Again, we ordered one of each of the deserts; a white chocolate cheesecake and a passionfruit panna cotta. Not only were they scrumptious, they were absolutely massive! The train then meandered its way through the hills back to our original destination Belgrave Station.

This truly was a glimpse into the golden days of train travel, they’ve definitely upgraded the simple train ride that’s for sure!

Where better to base yourself for a getaway in the Dandenong Ranges than amongst nature in your own luxury self-contained bluestone cottage. The Emerald Star Cottages are a serious hidden gem, nestled amongst the trees in the rolling hills the ranges are renowned for. Places this stunning and well appointed are definitely few and far between in the area, so the cottages are ideal for those seeking a luxe secluded escape! 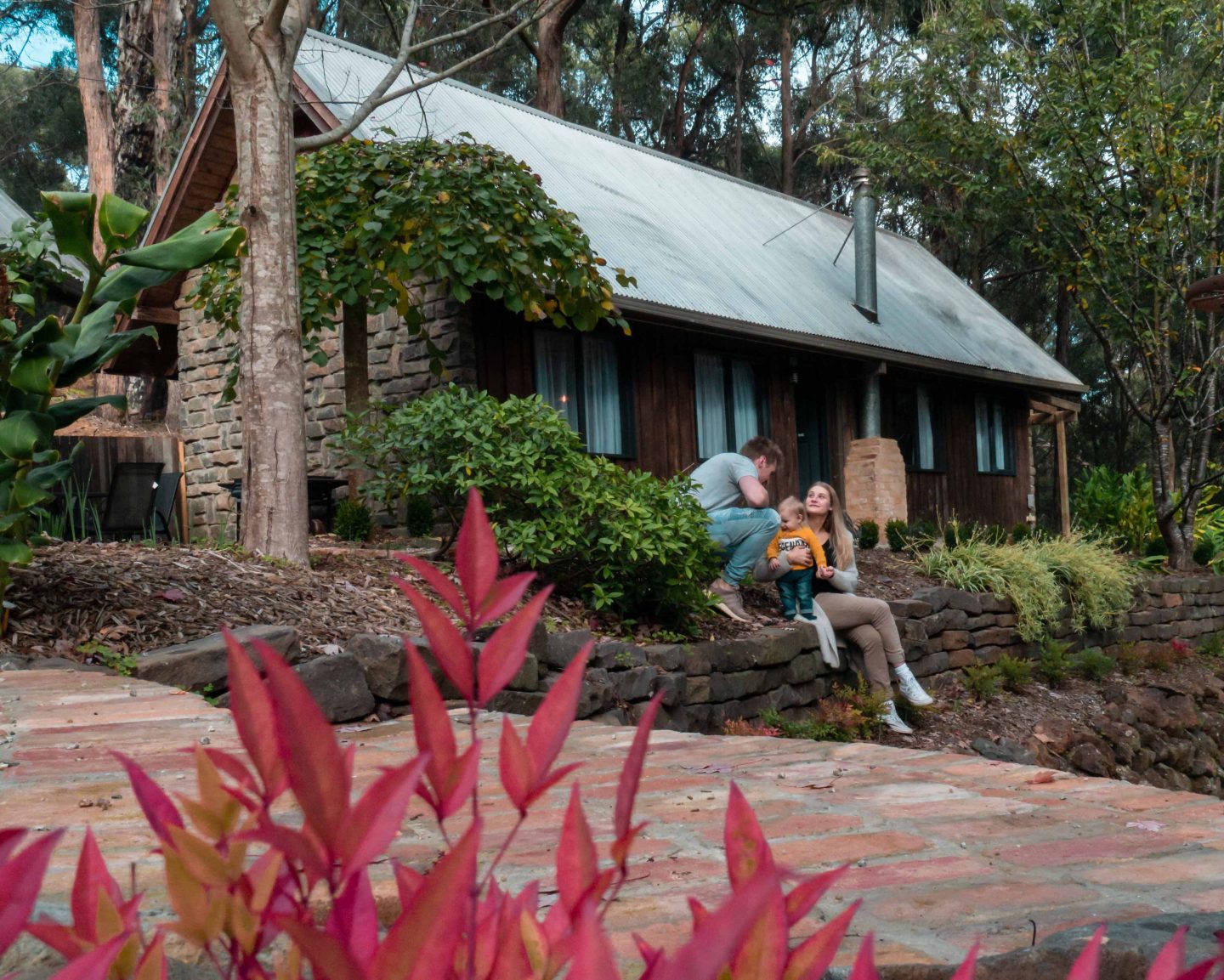 The property has 5 seperate and differing cottages available to book, all with their own charm and layouts from 1-3 bedrooms. Although original bluestone and mud brick cottages, they are absolutely immaculate and have been fully restored and modernised inside. The fact that most of them have their own kitchens is awesome, and you bet we whipped up a storm for breakfast with all the awesome fresh produce that can be provided!

We stayed in the Blackwood Rise cottage which was ideal for the three of us. It was extremely spacious, yet still managed to retain the cosy vibe of the cottage. Seriously, the bedroom was huge and there was more than enough space for Ollies portacot. Whilst there on a particularly chilly weekend, we were stoked to see that there was heating in both the bedroom and living room ensuring we stayed toasty and comfortable. You could really tell a lot of thought had gone into all the details of modernising the interior and we loved the style of the bathroom (ps the water pressure in the shower was fantastic!) 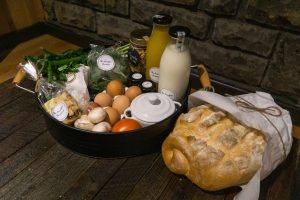 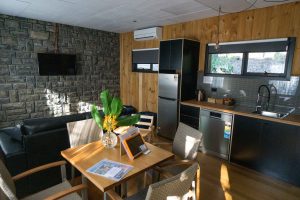 Keeping up with all the latest tech, each door is equipped with a smart key code lock, no more fumbling for keys! But something we thought super cool, is that each cottage has its own electronic tablet where you have access to a full guide-book of the area! Perhaps the best part about the cottages however is the fabulous gardens throughout the property. There is an abundance of flora and fauna and you’ll really feel like your experiencing the Aussie bush in all its glory. 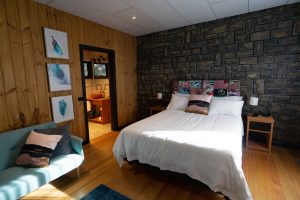 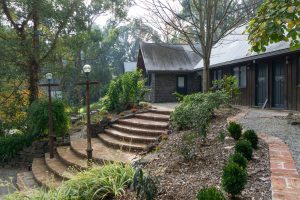 Disclosure: This post was created in partnership with Puffing Billy and Emerald Star Cottages. As always, all the reviews and opinions expressed are based on our personal view and experience.